In Isaiah 58:7-12 we read about the meaning of true fasting:
Is it not to share your food with the hungry and to provide the poor wanderer with shelter—when you see the naked, to clothe him, and not to turn away from your own flesh and blood? Then your light will break forth like the dawn, and your healing will quickly appear; then your righteousness will go before you, and the glory of the LORD will be your rear guard. Then you will call, and the LORD will answer; you will cry for help, and he will say: Here am I. "If you do away with the yoke of oppression, with the pointing finger and malicious talk, and if you spend yourselves in behalf of the hungry and satisfy the needs of the oppressed, then your light will rise in the darkness, and your night will become like the noonday. The LORD will guide you always; he will satisfy your needs in a sun-scorched land and will strengthen your frame. You will be like a well-watered garden, like a spring whose waters never fail. Your people will rebuild the ancient ruins and will raise up the age-old foundations; you will be called Repairer of Broken Walls, Restorer of Streets with Dwellings.”

As much as the municipality will allow us, we cooperate with them or with other organizations and in such a way can be a living testimony of God’s mercy.

With the help of donations through our registered non-profit organization Maim Haiim Hinam, we reach out to help people in financial distress, which usually spurs many other problems. 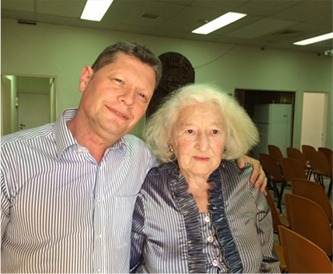 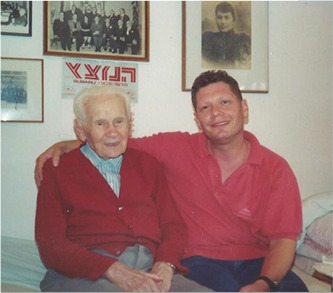 The largest part of the people we encounter on this journey consists of new immigrants. Rishon Letzion, by the way the fourth largest city in Israel, is home to a large number of immigrants, mostly from nations of the former USSR. The transition to Israel is particularly difficult for the older generation; they learn little Hebrew and manage to find only low-paid jobs. Often, they feel isolated and encounter financial difficulties. Often, they depend on their adult children.

Even immigrants of the younger generation with professions and diplomas usually cannot work in their profession at first, due to the lack of Hebrew knowledge. They are forced to take low-paid jobs. Doctors work as security staff, engineers work on building sites, as cleaners, etc. Both parents have to work in order to make a living for their children. Some find it very difficult to integrate into the Israeli society. An even greater burden, however, and often it is one they bring with them from their country of origin, is substance abuse: alcohol and drugs. With that, of course, they cause devastation to themselves, their spouses and their children, including verbal and physical abuse. For some, the road leads to homelessness.

At the beginning of our work we befriended two organizations of Holocaust survivors. Maim Haiim Hinam has regularly helped and encouraged them ever since, with food parcels, donations for their events and practical help from volunteers from abroad who offer their skills (repairs, building, painting, pedicure, etc.). We’ve also been able to perform some concerts for the survivors. 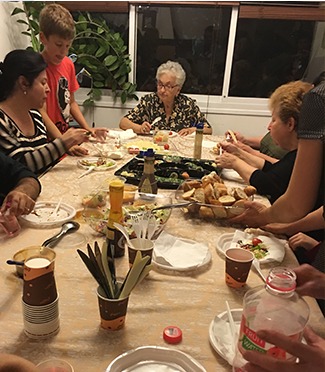 We regularly hand out food parcels to needy families and individuals, among them single mothers. It is our dream to have a place where we can serve warm meals, as serving meals in public parks is strictly forbidden. For now it is still a dream; that dream will be birthed when we will have an outreach and meeting center in our city.

YESHUA’S MINISTRY TO THE NEEDY

Let us remember that helping the needy was and is an inseparable part of Yeshua's – and therefore our – ministry. The Lord's power of supernatural healing originated in His heart full of compassion. His merciful heart opened the gate for His power and miracles to flow forth. In Acts 10:38 we read:

“...how God anointed Jesus of Nazareth with the Holy Spirit and power, and how he went around doing good and healing all who were under the power of the devil, because God was with him.”

Matthew 25:34-40
“Then the King will say to those on his right, ‘Come, you who are blessed by my Father; take your inheritance, the kingdom prepared for you since the creation of the world. For I was hungry and you gave me something to eat, I was thirsty and you gave me something to drink, I was a stranger and you invited me in, I needed clothes and you clothed me, I was sick and you looked after me, I was in prison and you came to visit me.’ “Then the righteous will answer him, ‘Lord, when did we see you hungry and feed you, or thirsty and give you something to drink?When did we see you a stranger and invite you in, or needing clothes and clothe you? When did we see you sick or in prison and go to visit you?’ “The King will reply, ‘Truly I tell you, whatever you did for one of the least of these brothers and sisters of mine, you did for me.’

“And when Jesus went out He saw a great multitude; and He was moved with compassion for them, and healed their sick.”

In Matthew 9:35-36 we read: “Then Jesus went about all the cities and villages, teaching in their synagogues, preaching the gospel of the kingdom, and healing every sickness and every disease among the people. But when He saw the multitudes, He was moved with compassion for them, because they were weary and scattered, like sheep having no shepherd.” 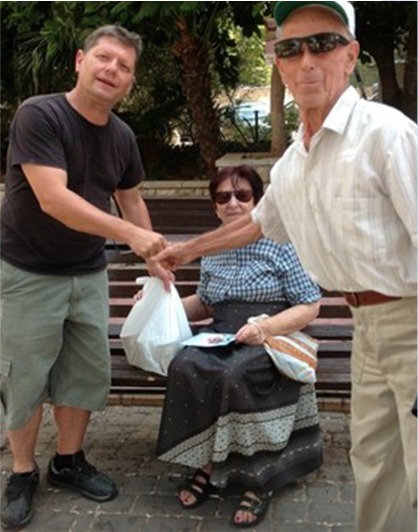 HEALING OF THE BLIND

HEALING OF THE LEPER

“Now a leper came to Him, imploring Him, kneeling down to Him and saying to Him, “If You are willing, You can make me clean.” Then Jesus, moved with compassion, stretched out His hand and touched him, and said to him, “I am willing; be cleansed.” As soon as He had spoken, immediately the leprosy left him, and he was cleansed.”

In every of these stories, the heart of Yeshua was moved with compassion for the people who turned to Him and, acting upon His compassion He healed them. Compassion was His gate to the supernatural. In the same way we desire to be a channel for the Lord's unending mercy and to show His heart of compassion for those rejected by society.